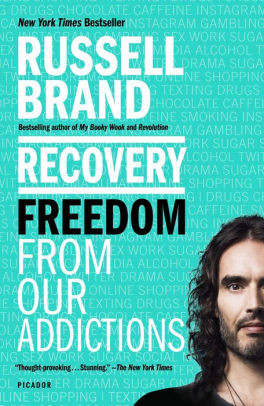 I’ve been reading ‘Recovery,’ by the comedian Russell Brand. If you’ve ever seen his stand-up act, you already have a feel for how he comes across on the page. He is an extremely verbal guy, he thinks in compound sentences and he doesn’t leave a lot of space in between them, either, he demands your full attention.

As nearly everyone knows by now, Bill W penned the book ‘Alcoholics Anonymous’ back in 1939, laying out the 12-step program formulated initially by himself and Dr. Bob, and there is no denying the fact that it has saved millions of sufferers from years of misery and early death. The book has attained a status similar to The King James Bible, which lots of people think was dictated by God Himself to some dude named King James, and if you disagree too loudly, they’ll come for you with torches and pitchforks. One would assume, however, that God gave you that lump on your shoulders for more than just a place to put your hat.

In any event, I like Brand, and I like his style. His writing makes me think of a baby bird in a nest at the top of a tall tree who leaps into space in full faith that he will learn how to fly on the way down.

The sport of kings